Copa Airlines has a tight relationship with United (partnership? part ownership?) and has cloned a lot of United’s program, like its award chart.

I realized that Copa upgrades work on United airlines, which made me look into the rewards program further.

With 6 global upgrades and 6 regional upgrades that work on United (as well as complimentary upgrades on Copa), the Copa PreferProgram becomes an interesting choice for status-chasers in the US.

The other benefit of Copa’s status over United, is that it doesn’t require $15,000 in spend to get the global upgrades. And, it requires less miles to get status, and it currently isn’t revenue based earning, even on United flights!

Almost everything is the same or significantly better with Copa status.

The first half of this chart is how to earn Copa status, and the second half is a chart of all the benefits.

They of course have a chart of benefits, but like most programs, the majority of the benefits don’t differ by status tier… Which means therefore I don’t need a visual display to help me understand that they are all the same. So I’ll obligatorily add all the other benefits later in the post.

The chart above does a great job of explaining benefits for each status tier, and how to earn each status tier. But I wanted to dive into the details of the benefits a little, as they have particularly great upgrade benefits.

There are lots of benefits of status that I won’t go into because they are simply already explained in the chart above (like bags and earning 25% to 100% bonus miles).

Instead, I see upgrades as not only a main benefit, but the subject that needs the most time.

In this section I’ll discuss the following:

Policies For All Upgrades:

Award Tickets Are Eligible For Upgrades!

It’s a little more clear for Regional and Global Upgrades, but still has similar language for complimentary upgrades.

It does say that upgrades on United flights are not eligible for the following classes “Z, P, S, T, K, L, G and N”.

However, I went to United and checked an award to Japan and it was “X” class.

However, Complimentary Upgrades already have a less clear policy:

Presidential PreferMembers who are flying Economy with tickets bought with miles on a Standard Award (G class) may be eligible for complementary upgrades depending on the availability of the flight, after finalizing the upgrade process of regular tickets.

6 Global Upgrades is the benefit that you only get at top tier status, “Presidential Platinum”.

The best part of these is that they work on all United and Copa flights.

Every year you qualify for Presidential status you get 6 Global Upgrades, which allows you to book an economy ticket and upgrade to business class.

However, I do not advise using Global Upgrades for Copa flights, since Regional Upgrades work on all Copa flights. Regionals are basically limited to Latin America, so I would save my Globals for long haul United flights to Europe, Asia, and Pacific.

You get 3 Regional Upgrades for reaching Platinum and 3 more after reaching Presidential.

The amazing thing here is that these regional “upgrades are valid on all Copa Airlines and Copa Airlines Colombia operated flights“.

All Copa flights? Even US to Chile or Argentina? In my opinion, that makes these some of the best mid-tier status upgrades.

The Global Upgrade policy is near identical to United’s, but the Regional Upgrades get the added benefit of redeeming on all Copa flights.

Regional Upgrades also work on United flights within “Continental U.S, Mexico, Hawaii, Central America, Alaska, Caribbean, Canada, Oceania – Except (HNL) Honolulu to (GUM) Guam”. So you could use a Regional Upgrade on a flight from LA to NYC, but other than those long domestic US flights it’s better “value” on Copa.

There is one odd term here: “Eligible for a Complimentary Upgrade if… the member is alone in a reservation“. So if two members are on the same ticket, are they better off booking separately?

Either way, this is an amazing benefit that starts at Silver. United limits theirs to United flights within specific regions, but on all Copa flights. Even at Silver, this is an amazing deal if I want to book last minute trips to South America. Wait until the 24 hour mark and pick a flight with Business award availability, and book right into business class at economy price. Pretty amazing.

For “Companion” Upgrades, they have to get upgraded at the airport during check-in process. “The companion will be added to the upgrade standby list at the airport.”

How To Qualify For Copa Status

There are two ways to earn status on Copa:

To earn status you need to meet the qualifications within a calendar year.

Just a reminder of qualifications:

Earning via segments is only possible on Copa flights.

This is not tickets, but each segment on a flight.

The thing I’m not clear about here is if “Copa Airlines Colombia” flights count towards segments. My thought is no, because it’s the one time that it doesn’t specifically list it when it normally does. If it did, there would be a clear play to connect both in Panama and Colombia to maximize segments on tickets.

Maybe SJO (San Jose, Costa Rica) is another option, which has flights to Guatemala City, Managua, Panama City, Tegucigalpa… if you can figure out a way to force the SJO connection.

The problem with qualifying on segments is that you can only qualify on Copa, which is fine if you are going for a low status or already need Copa flights. If you only need 20 segments, sure, find a flight with 2 connections and fly it roundtrip 3.5 times. Bam. Status with the complimentary upgrades on Copa.

I’m just saying that 90 segments would be a ton of segments if you could only fly Copa.

The problem with earning status with any airline these days is that airlines have severely gutted their earnings for discount economy flights… which is just the fancy term for basically all economy flights you see online and end up buying. Now “basic economy” versions of tickets still in economy seats can cost thousands more.

Still, if you can find partners with a decent fare and decent earnings, this could be the best way to qualify.

The only time we had Alaska top tier status was because we had a ton of mistake fares, like roundtrip flights to Asia, Africa, and the Middle East all under $200. Most of the flights only earned 50% Alaska Miles but the deals were so good we earned status pretty cheaply.

The biggest problem I see here is that elite Copa Status doesn’t give any bonus miles towards qualifying miles.

To see how many miles you would earn for a flight, you need to know two things.

Example Of How To Find Earnings

These are not yet examples of deals and ways to earn miles, but showing how to know your fare class code, and what it means.

Here’s a flight on United.com in “H” class:

Or here’s an EVA flight on Expedia in S class for the same route: 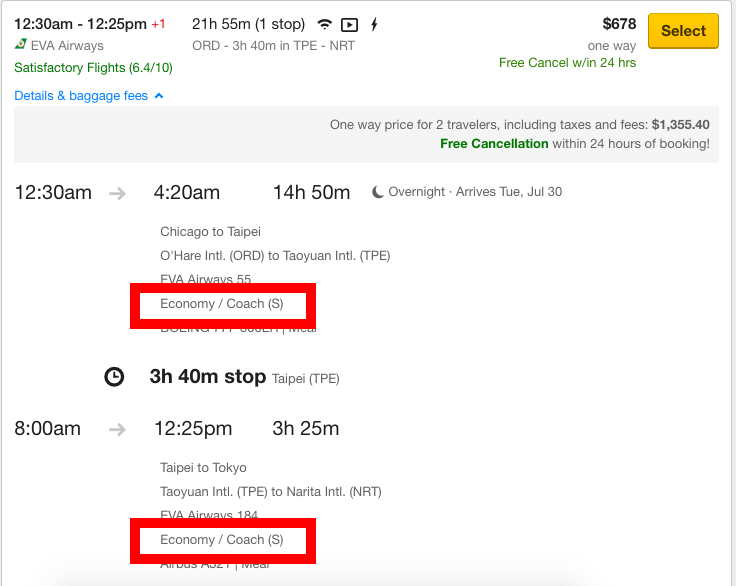 The other benefit with Copa Status is that Copa’s Star Alliance award chart is basically the same as United’s award chart before the devaluation two times ago (before they went partially distance-based, they raised some prices, like most business class).

Actually, I can’t remember but some prices may be even cheaper than that. For example, Japan to Guam is 12,500 miles on Copa, and I think that devalued a long time ago.

Then they have a different award chart for Copa flights.

Go here to look at actually booking online. It’s pretty easy and similar to United, but you have to select “All” airlines.

It’s similar to what you’d expect on United.com with slightly lower prices in many areas. The website even prices out by flight on multi-city award search.

However, it claims that 1 stopover is allowed, and doing basic searches that would even comply with the most basic of rules (like US – Europe – Europe – US) and it still prices out each flight separately and doesn’t give a free flight/stopover. So you might have to call.

The rule is technically the old United rules: 2 open-jaws and 1 stopover on roundtrip award tickets.

Compared to United, Copa’s status benefits are better, the terms are better, and the status is easier to earn.

This is one of the best status programs, but qualifying these days is quite hard. IMO, it all depends on finding a good fare that can earn lots of Copa miles.

But, if you were someone mileage running for United Status until they added the revenue requirement, in theory, you should like this program even more.

Explaining Airline Status and the Benefits