While I’m going to publish a “Complete Guide To United Stopovers” soon, I wanted to first give some context about the current state of United stopovers.

United plans to make some major changes by getting rid of their award chart in November and going to dynamic pricing (where you don’t know the rate until you search). Although it is currently unclear whether or not they plan to do the same for partner flights, or if it will just be United flights. (See details about United Eliminating the Award Chart)

In the meantime, they seem to be testing this by making some domestic flights cheaper than normal. For example, I saw a United New York to Washington flight for only 5,500 miles.

Believe it or not, I think there are positive impacts for those really trying to make the most of their United miles with stopovers.

You might think I’m crazy, but not only do I still think United miles are the best transfer partner of Chase Ultimate Rewards Points by a long shot, I also think they just got a little bit better for stopover enthusiasts.

I’ll quickly gloss over United stopover basics (because I’ll be doing an entire post and have done other posts) to simply give context for the implications of United’s new pricing.

Really United stopovers are free segments branded as “Excursionist Pack”, a term I don’t use. I’ll either refer to the concept as a stopover or a “free segment”.

For example, you could fly to London, and instead of making a roundtrip and coming straight home, you can add a free segment in Europe, like London to Rome, and then fly home.

1) A free segment within any region.

Let’s say you start in Chicago and go to London, your next free segment can be anywhere, it doesn’t have to pick up from London to Rome, it could be Paris to Rome.

Let me work through a bunch of valid examples, but I’ll use hyphens (“-“) as segments and slashes (“/”) as open jaws.

(In other words, Chicago to London, then an open-jaw to Paris (a gap in the ticket where you are responsible for your own transportation, i.e. train, bus, another flight, car rental, walking, etc…) for a Paris to Rome flight would look like this: Chicago – London / Paris – Rome)).

All of now, the following are valid examples (all italicized routes would be free segments):

What’s crazy, is that I’ve found that you don’t actually have to have the free segment in a relevant region. For example, all of the following are valid (all italicized routes would be free segments):

Remember my first rule “flight must end in the region of origin“, which means you have to end your last segment in the region you started in.

That being said, it’s a pretty loose set of rules. And while it wouldn’t make sense to tack on a free segment in South America in the middle of a roundtrip to Europe, it would make sense to do a lot of other things.

For example, it could make sense to tack on a free flight within Africa if your plan was to take a boat to Morocco, or a flight down to Kenya, or who knows what.

Why the new pricing is relevant

Here’s where this gets crazy.

If you’re familiar with old stopover rules, you might falsely assume that the last segment that has to end in the region of origin has to be an international flight… But it doesn’t.

In other words, any of the following routes are valid routes (all italicized routes would be free segments):

This may sounds completely crazy, but I’ll explain why in many ways it’s not. Let’s unpack it.

Somehow a roundtrip from Washington DC to New York can have a free segment in Africa sandwiched in the middle. This would actually work with any free segment, and it would work with any trip that starts and ends in the same region.

The crazy thing is that this intra-Africa flight would normally cost 20,000 miles, which is more than the the roundtrip in the US would be now, and it shows the segment free:

What’s absolutely bonkers, is not just that this 20,000 mile flight can be free with such a non-expensive ticket…

But right now United is practicing its dynamic pricing on these short domestic routes and it prices this short route out at 5,500 miles each way when I booked as part of this “roundtrip”. 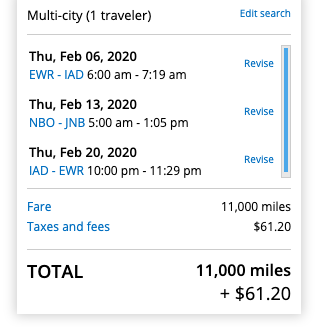 The screenshot above is the following:

That means a domestic flight and a segment within Africa (which is normally 20,000 miles alone) comes out to 11,000 United miles.

This concept works in any combination.

As long as it starts and ends in the same region and as long as the last flight ends in the region it started in.

First of all, with those concepts, it really means there are near unlimited combinations possible for this free segment.

And because the free segment in the example above is more valuable than the free flight, you don’t really have to take the second flight to get plenty of value out of this. (If you even skip a flight, the rest of your ticket is usually canceled, so never skip a flight on a ticket where you have later segments).

As long as you could use a flight within a region, and you can take the first 5,500 mile flight, this concept is useful.

It could even be an open-jaw on another United mile flight.

It also doesn’t have to be a really broken up ticket.

The concepts work in any class.

United will give you the option of a free (0 mile) segment up to the class of the previous segment.

If the previous flight was US to Europe in Business, then your free intra-Europe segment (or wherever your free segment is) will be free for economy or business class. 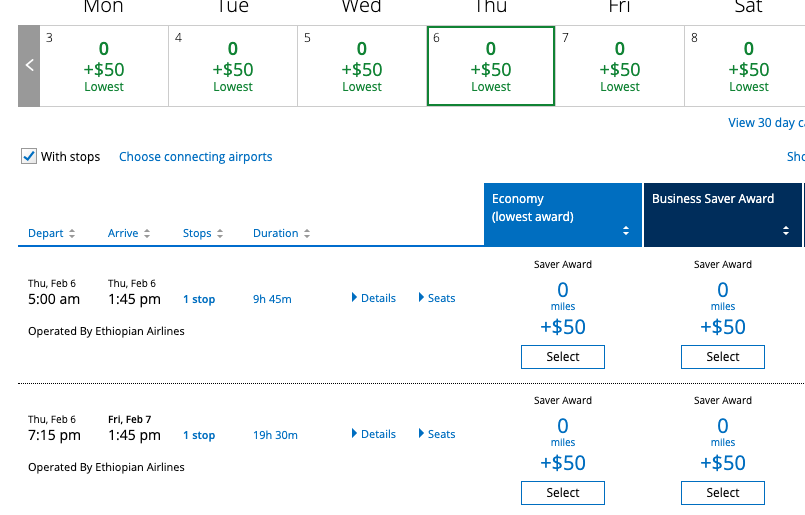 For example, you could do the following:

Total is 85,500 miles. Regardless of whether or not you need to fly the last domestic leg, you’d surely pay 5,500 United miles to get an intra-Africa flight in Business Class for free. 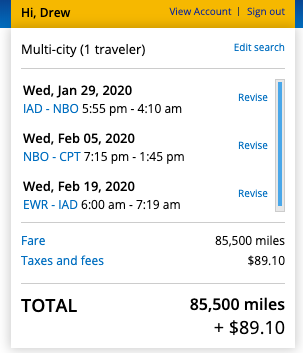 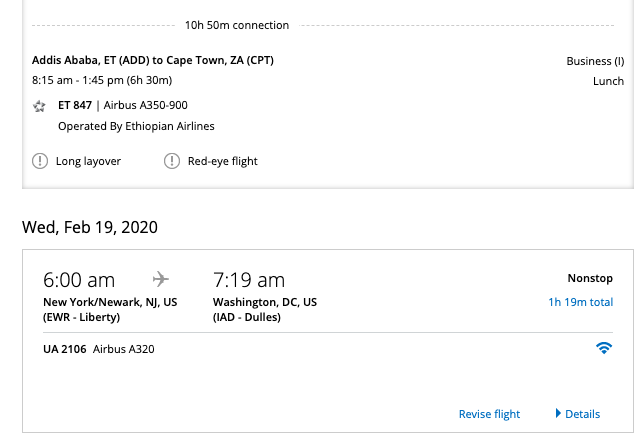 The amazing thing about United’s new dynamic pricing for domestic flights is that any flight starting in the US can now add a stopover (or rather, a free segment) for 5,500 United miles.

Why The Crazy Open-Jaw Could Be Practical

It might look crazy to have an Intra-Africa flight in between a domestic flight, but I can think of a dozen practical uses for the average miles collector. (And remember, intra-Africa is just an example and it could be within any region).

After all, recently I posted about many deals that only start in New York or east coast cities in my post on Best Use of Etihad Miles (on Partners).

For example, I mentioned Flights on Royal Air Maroc to all over Africa and the Middle East for only 44,000 miles in Business Class  (or 22,000 miles in economy).

Or heck, as I mentioned in my recent post on Finding The Best Alaska Stopovers that you can get to South Africa on Cathay Pacific (with a stopover in Hong Kong) for only 70,000 miles in first class!

You could use the ticket above to get there and one of the other options to get home. Or use the Air Maroc option oneway, and the Cathay option to get home, and the free segment to connect them.

Therefore you can use the domestic United segments to get to New York for these flights that don’t allow you to mix partners anyways, and therefore leaving you in need of a domestic flight.

Or you could break up the ticket into multiple tickets.

Perhaps you start at home and take a flight to Hawaii using United miles, and then get a flight home from Hawaii on another airline.

Then you could take a flight within the Middle East 9 months later. And as long as you have a segment ending in the US (like NYC to DC for 5,500 miles), the Middle East segment is free.

And if you made that first US – Hawaii flight a business class flight, the free segment in the Middle East (or anywhere) could be business class too.

These new 5,500 United mile tickets mean that you can get free segments in many places for less than the domestic flight.

If you’re a little lost though, again, I will post a “Complete Guide To United Stopovers”, and it will include a new little trick for those who want the free segment to be in Business Class.