The [Only] Delta SkyMiles Award Chart

Delta officially says they don’t have an award chart, but after doing tons of searches, we found very consistent pricing to the majority of regions. There are a few variations I’ll mention below the award chart, but I think it’s important to visualize award charts so you can find the good deals… That’s why I make these.

And part of this process is a very sweet added bonus: we’ll also be updating the Delta Miles Calculator very soon, which will be more interesting than ever.

In short, while their international and partner awards have a ton of pricing consistency, all their North American flights vary a lot from place to place. So for domestic flights, check back and we’ll post when that tool is updated!

In the meantime, enjoy the newly updated Delta Award Chart! 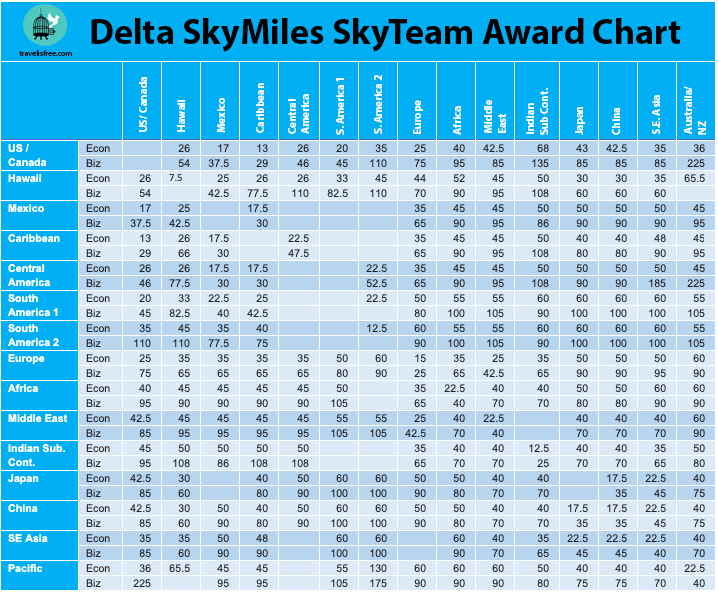 Despite “not having an award chart”, SkyTeam flights with Delta Miles are very consistent. However, Delta flights still vary a bit, even on some international routes. But I was able to figure out a few consistent themes.

Although, a few things might be different than you’d assume.

I’m used to Peru being part of “South America 1”, but it was consistently priced along with Brazil and Chile. But the big variations are based on US departures.

All of North America seems divided up. But I wanted to give an example of variations of results from New York (JFK) and LA (LAX) to a number of regions where we saw consistency from those airports to a region, but variations across the US. 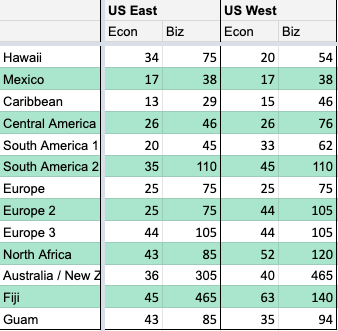 Thus, I think this little US chart is actually pretty important.

Most importantly, look at the difference in prices to Hawaii!

(Also, note that the Caribbean and Mexico seem to vary city by city and therefore we’re looking at adding those to the calculator).

Europe is divided into multiple regions.

This is also important – notice that I divided Europe into 3 regions on the chart above.

Europe is consistently divided from west to east (roughly) in price, but only when coming from the US.

This seems to be a delta variation.

That is why I labeled the above award chart a “SkyTeam” award chart. Delta Miles is decently consistent on Delta with some distinct variations. But it is very consistent with SkyTeam.

Another Europe example is that there seems to be no difference for flights to Africa and North Africa unless you depart Europe.

Similarly, SE Asia can be divided up on certain examples.

Another thing to note, US to the Pacific has pretty inconsistent pricing, with some of the highest business class flights. Although, islands like Fiji might be cheaper than flights to Australia and New Zealand.

I’ll be doing two posts on interesting findings and updating the Delta Miles Calculator, all of which I think are plenty interesting on their own.

But for me, it’s important to have a stand-alone award chart. Therefore, I wanted to get this out and keep working on the Delta Miles Calculator.

Look for that soon!

A Data-Driven Look At Delta SkyMiles