Singapore KrisFlyer Miles are worth discussing, not just for the sweet spots on the award charts, but because of the abundance of ways to earn.

This post however is not about earning, it’s about occasions when you may want to transfer to Singapore Miles. Whether it’s the cheapest flight to Hawaii you’re looking for, or availability due to the ability to book partners 352 days out, there are many reasons to use Singapore Miles.

In this post I show the new Singapore Miles award charts we made, a Singapore Miles Award Map, a chart to compare/contrast with AA miles, and some discussion about stopovers, booking online, avoiding fuel surcharges, and sweet spots.

Let me quick explain that there are multiple award charts for using Singapore KrisFlyer Miles. The first award chart is for redemptions on Star Alliance Partners (I also created maps and a few other resources). Then I created an award chart for Singapore Miles on Singapore Airlines flights. Then I discuss three other partners and their award charts (Alaska, Virgin Atlantic and Virgin Australia).

There are gems in every award chart.

Best Use Of Singapore KrisFlyer Miles on Star Alliance Airlines 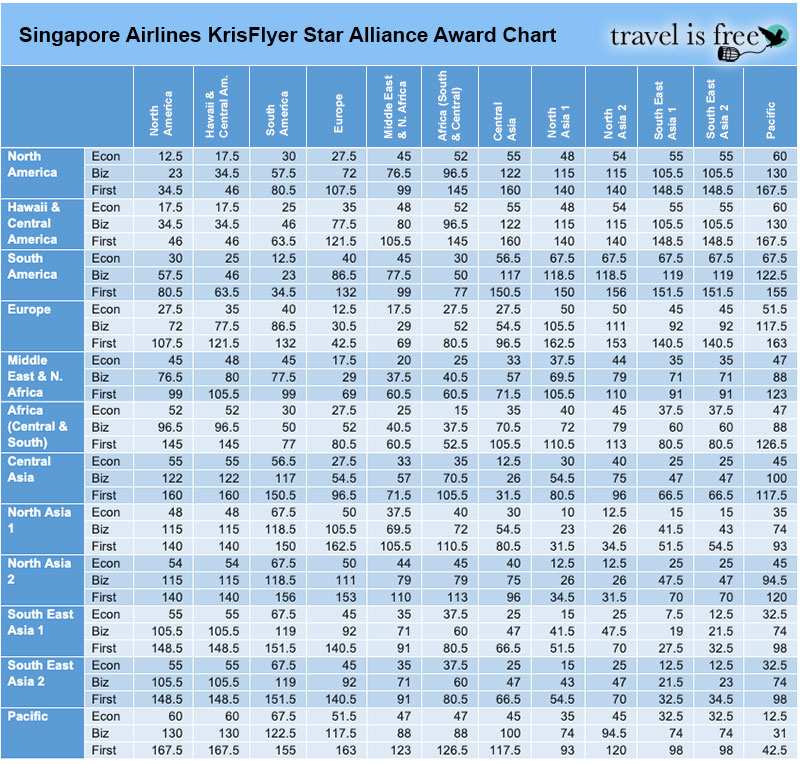 You can find all award charts, all the time, at The Master List Of Airline Award Charts.

The chart above is a new chart that goes into effect April 16th. Although, the prices are pretty similar, and the following is a chart that shows how prices will increase on April 16th:

As you can see, if you’re booking a business class or first class ticket with Singapore Miles on Star Alliance Partners, it will likely be a little cheaper booking within the next 9 days.

I think one pertinent thing for discussing deals on the award chart is to know which countries are included in which regions… So I put it in map form so I can visualize it.

This map does two things: it shows the prices for each country, but it also lets me see the regions via seeing the different price points.

AA has one of the best award region based award charts, so I am using it as the litmus test.

Here are the obvious savings:

Prices are competitive in the following areas:

12,500 miles for intra “South America” is a great deal. Given that all of South America is one region, that’s a huge area. Unfortunately, Star Alliance has terribly few routes within South America. OneWorld really stole that away from them.

Intra-Africa (Central and South Africa) for only 15,000 miles is a good deal.

The second column will say “Yes” if it’s bookable on Singapore.com.

In order to properly compare, the third column shows the total fees for direct flights from North America. Therefore anything above the $5.60 airport fee is avoidable on another partner. (I put “n/a” for airlines that don’t have North America flights, and United always only adds $5.60).

What this doesn’t include is connections, which not only add airport fees, but on partners like Lufthansa, the fuel surcharges now add up to $500 for a flight to the Middle East.

I find the search engine to be not all that great.

The “flexible search” is worthless, you have to start over if there isn’t space on your exact date, I got a dozen errors trying to search NYC to Tokyo, it failed to make obvious connections, and some partners just don’t show up sometimes.

I completely left off South African Airways because I couldn’t find a single US to South Africa award seat despite finding award space on United.com. Yet, I could find a few intra-Africa flights.

How to book online?

Best Use Of Singapore Miles On Singapore Airlines Flights

There are a number of advantages to using SQ Miles on SQ flights: 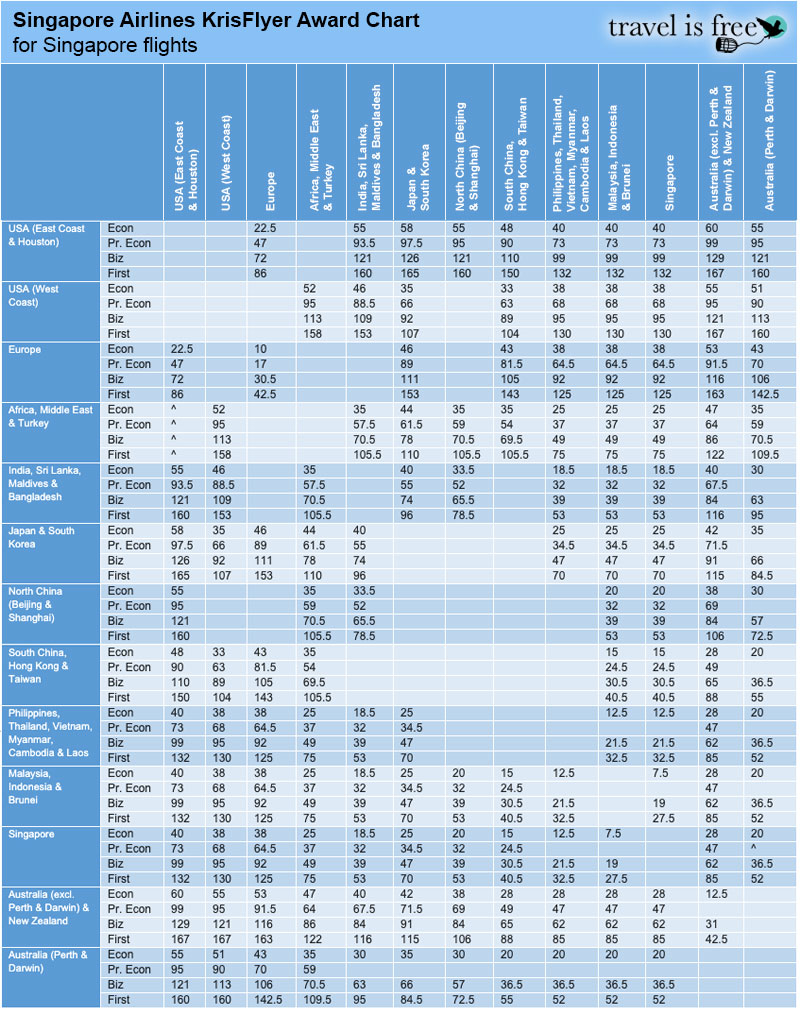 Again, you can find all award charts, all the time, at The Master List Of Airline Award Charts.

It’s a little bit cheaper to fly Singapore Airlines from North America to Asia than on a partner – 38k to 40k instead of 48k to 55k. Plus, again, no fuel surcharges and very bookable online.

There are a few other notable savings as well…

22.5k miles to Europe. It’s only for NYC to Frankfurt and Houston to Manchester.

Also, note that you can book a stopover in Frankfurt or Manchester.

West Coast USA to China is only 33k miles.

Or Asia to Australia for 20k.

You won’t hear me say this often, but First Class makes more sense than business. Mainly, I don’t think the business class prices are competitive, so I think “why would someone want to transfer to Singapore Miles for premium cabin, instead of another partner?”

Of course, availability might be a valid reason. I can actually find Singapore Airlines business class flights across the Pacific.

Other than availability, I’m thinking the only reason to pay over 100k for a oneway across the Pacific is you have tons of miles and want to fly the best.

Price for Suites on different routes in oneways:

Remember, you get a stopover as well!

In terms of hours spent flying to the cost, I might say New York to Singapore direct is the best deal. But also tacking on Sydney from Europe only adds 17.5k miles, and from the US is only 28k, for an extra 7.5 hours of flying.

Of course, the big issue is availability.

Am I crazy, or is this by far the cheapest flights to Hawaii.

Flights to Costa Rica, and Mexico for 7.5k? Well remember, this is only on Alaska Airlines flights, and officially “backtracking” isn’t allowed. So this leaves a limited number of options. It’s better from Zone 1 (which is 12k) as there are a number of direct flights from LA and Seattle to places in Mexico and Costa Rica.

One small note, I don’t think Alaska has flights to Cuba anymore.

Regardless, this is by far the best way to get flights to Hawaii, there may be some cheap flights to Mexico and Costa Rica, and there are certainly a number of cheap domestic flights for those who can use Alaska flights. For example, a flight from LA to Seattle is 7.5k.

Virgin Atlantic flight from North America to Europe is actually a great deal. 25k in economy, 32.5k in premium economy, and 50k for business class.

Taking a quick look at my Chart Of Sites That Search Airline Award Availability, it looks like Delta.com is the best place to search for Virgin Atlantic award availability.

As you can see, the only North America price is to Europe, and all the other prices are to and from Europe. So you could book a ticket to London (their hub) for 25k, and then add on another ticket to the Middle East for only 17.5k (like Israel or Dubai). That’s 42.5k for a oneway to the Middle East (or 85k in business class) on Virgin Atlantic, and you get a stopover in the UK (as they are separately priced tickets).

Also, you may not be able to book Virgin Atlantic flights to Europe, except the UK. If it would make you pay for another ticket within Europe anyhow, it would be cheaper to fly Star Alliance. But I can’t help but notice that there is no Europe to Europe price shown and the only country listed under “Europe” is the UK.

Use the chart I linked to for details, including countries.

However, Virgin likely does pass on fuel surcharges!

Below is the Virgin Australia award chart (with details found here): 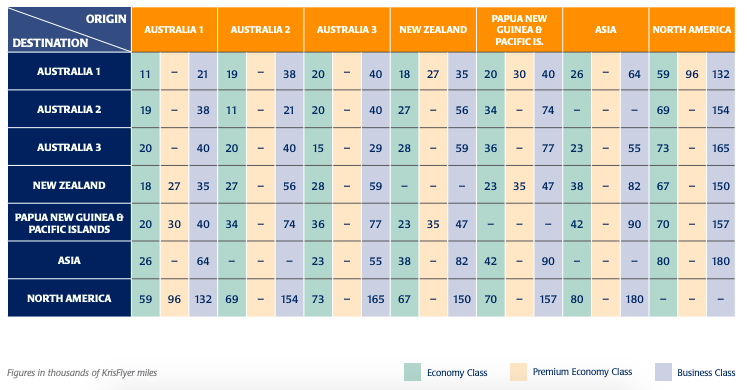 The best use I see booking SQ miles on Virgin Australia is from Australia (like Sydney) to the Pacific Islands or Hong Kong.

Sydney to Hong Kong is only 26k, which is slightly cheaper than a flight on Singapore.

But also, could be a good way to get to some Pacific Islands for only 20k miles. They have the following destinations listed: Cook Islands, Fiji, Papua New Guinea, Samoa, Solomon Islands, Tonga, and Vanuatu.

Unfortunately, the only Virgin Australia destination in the US is LAX.

Other Partners: Vistara and Juneyao Airlines

I left out Vistara and Juneyao Airlines, but if you want to look at these little airlines, you can do so here.

Basically, it has to be a roundtrip and you get one stopover. Pretty normal rules.

However, this ability to book stopovers for $100 each is quite interesting. If you were booking a ticket to Brazil or something (for 60k roundtrip) and already had plans to use your 1 free stopover, adding another for $100 is huge, as most tickets within South America are way more than $100.

Or, what about a ticket to Africa on South African Airways oneway and Ethiopian the other direction. Sure 104k is a bit much for that ticket, but the ability to stop in Ethiopia (or elsewhere) and stop in South Africa on the way to another amazing destination, like Namibia or an island, is a great deal. Again, flights within Africa are usually a lot more expensive.

After a quick Google, according to OMAAT you can use the $100 trick to Book Stopovers on Oneways With Singapore Miles. I didn’t see that in the rules, but they would obviously know.

This is a great post for anyone serious about Singapore Miles!

It also led me to a great post on getting the 15% Singapore Miles online discount over the phone.

The main difference in the terms is that you can book the “Advantage Award”, which is much more expensive than the saver prices I’ve shown (see award chart here), allows one stopover per oneway. Not worth it.

Otherwise, the same rules as above.

How To Book Stopovers with Singapore Miles

For Singapore Airlines flights, you can book online.

Just scroll down to the bottom, and you’ll see “Add a stopover”. In that box, click “Proceed”.

Then you’ll have a box where you can click “Add a stopover” and select the date and city. 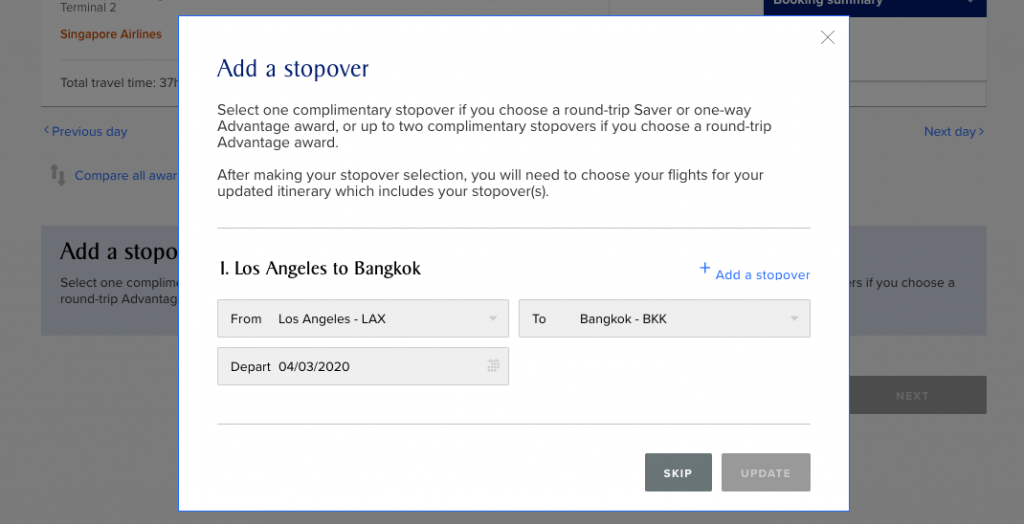 How to book Partner stopovers with Singapore Miles?

You simply have to call.

There are tons of great uses of Singapore Miles:

As you can see, there are lots of best uses of Singapore KrisFlyer Miles on partners and Singapore flights, and benefits with booking beginning 352 days out…

But the main reason you’d have Singapore miles to use, is again, because it’s a transfer partner of Chase, Citi, and Amex points.