You’re Doing It Wrong: Use a Better Search Engine For (Paid) Flights

“You’re Doing It Wrong” is another new series (every other Saturday) where I take common deals and show you how to do it better!

It is shocking to me the number of people who use terrible websites for searching for cash flights (this post is not about miles/points flights). Friends will send me a paid flight and ask if I can find one cheaper, and I can almost always find a better flight price instantly!

I’ll show you why you shouldn’t use Expedia or similar sites, the sites that are great for finding cheaper fares, and why I book on a different site than I search.

At the end, I’ll give a summary and a list of tools I use.

I know not everyone is flexible, but let me get the obvious out of the way.

This is a setting, in Kayak.

Even if you are using Expedia, it is also a setting. 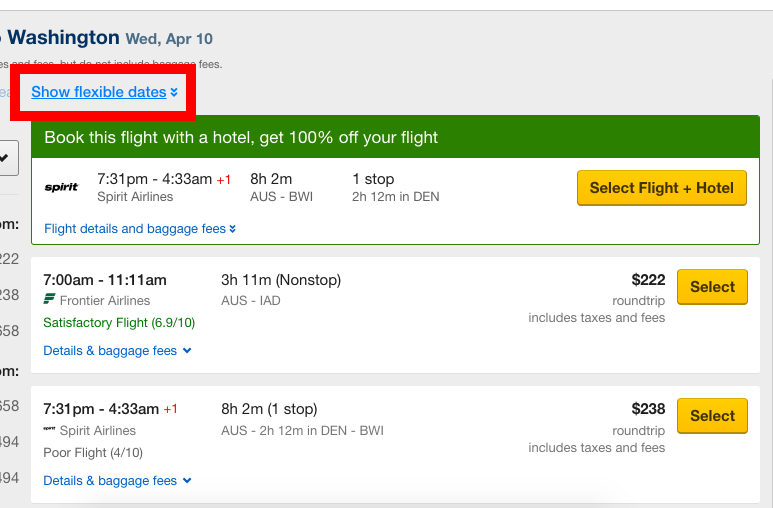 But if I simply click “Show flexible dates”, I see cheaper fares with one day difference!

Now I see $154 for returning a day later, or $170 if I move the entire trip back a day (but it still would be the same number of nights). 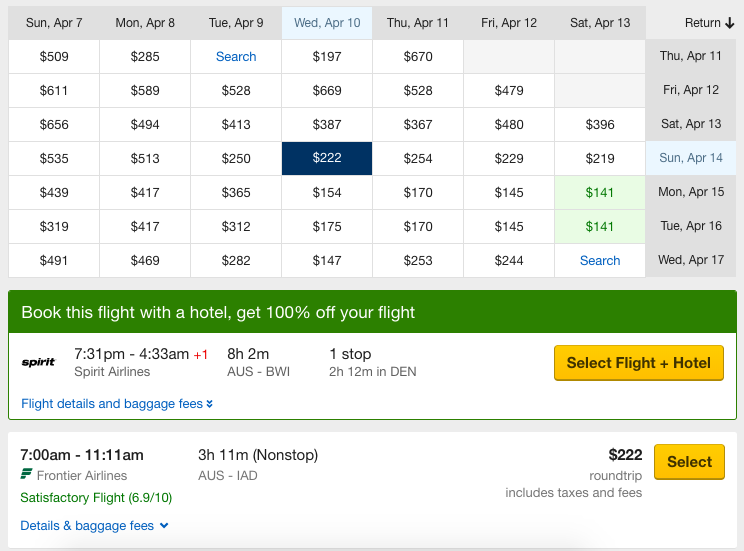 But I prefer to do this on Kayak, or one of the other deal sites I’ll mention in a bit…

I’m about to talk about why I love Kayak for a little bit (and then the other sites I use).

The advantage of Kayak is obvious, it searches more airlines, more fares, and more booking sites.

You’d definitely be doing it wrong if you went direct to AA.com or United.com to search for your flight (when you’re not using miles), and bought a ticket without knowing if another airline has the same flight for cheaper. That would be insane right? Even if you had status, you’d want to know if a competitor had the same flight for a fraction of the price.

Similarly, why only search on Expedia, which only shows fares bookable on Expedia? It also only shows certain airlines.

This is true for Expedia, Priceline, Orbitz, etc… If you are using any of these, you’re doing it wrong.

Out of curiosity, I took the same dates and plugged them into Kayak. I was expecting to see a different airline or maybe Kayak would find a different cheaper booking site. But no, something much simpler.

What happened here is that Frontier has a $59 oneway, and combining the two airlines with two different oneways instead of a roundtrip, saved money.

For a oneway from Austin to Bali on Sept 11:

Expedia searches fewer airlines because they only show airlines that pay them for bookings, and therefore they will only show you flights you can book on Expedia.

Here’s a great example, Austin to Lyon, France on Sept 5:

The reason here is that Expedia doesn’t yet search Norwegian Airlines.

(BTW, we recently flew the Norwegian Austin to LGW route, and I thought it was fine, direct, and they allow our giant carry on).

Kayak isn’t even the best at this, I’m just trying to show why it’s better than Expedia.

There are lots of tools to do this.

First, let me start with the “duh”, and explain any site likely lets you search the nearby airports with a simple change in the airport code.

See, you’re doing it wrong if instead of searching all New York airports, you only search “JFK” or “LGA” or “EWR”, either only one or one at a time.

Instead, you can type in “NYC” to search all the airports, or as you can see below, just type in the city name and click on the “all airports” option. 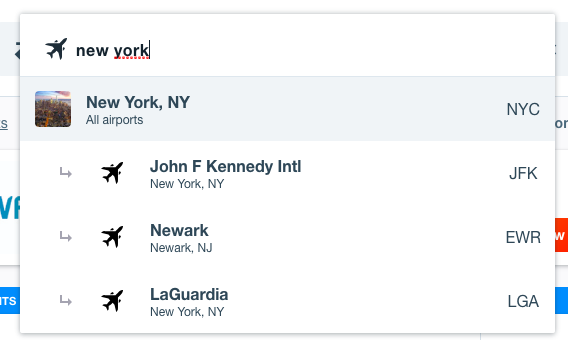 The less obvious option is to search for other airports and drive or bus, or whatever.

On SkySkanner.com you can search Austin not just to a city, but to a country, like France.

Finding flights to the cheapest airport:

You can also leave it blank or type in “Everywhere” to see options for Austin to everywhere.

I did this and scrolled around to see if there were any places near Lyon, or we were also going to Switzerland. 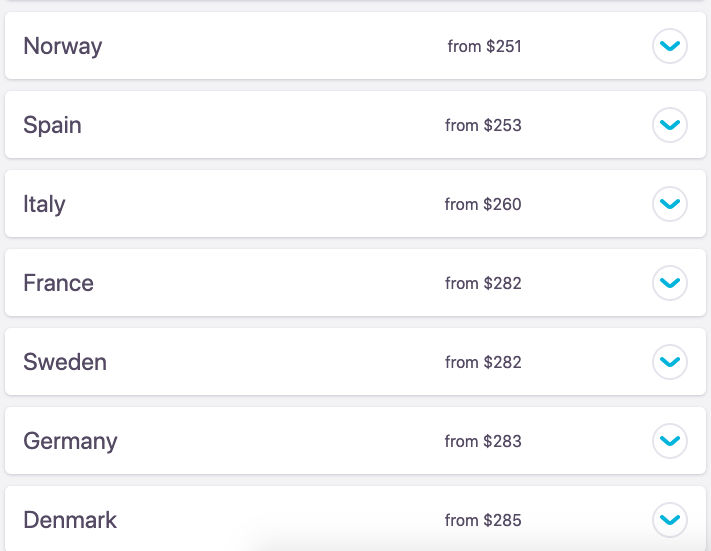 I was totally fine flying into a different airport in Europe if I was actually interested, or if I could easily take another connecting flight or train, or get my rental car from the other airport instead.

When I went, I found I saved a bit of money by flying into Paris. I hadn’t been in years and figured I’d give the city another shot, stay at the InterContinental Le Grande, and then train down (for $15) the next day to Lyon.

There are also a lot of other cities in Europe I’d be interested in visiting, for example, I’ve never been to Copenhagen. So if I could’ve stayed there and taken a discount airline down for super cheap, I would have preferred that.

Often I find that people move around in Europe and a typical roundtrip actually makes less sense for them. Thus, searching destinations as a oneway and then looking at dates can help you find the cheapest combination.

You may find it’s cheap to fly into Rome and out of Venice, and you were going to go to both cities anyway.

If you click “Explore Destinations” you get to a screen that allows you to see all destinations on the globe, filtering under a certain price, and for any date or a month. Below you can see I’m searching for flights from Austin to everywhere, under $350, and in September.

The problem with Google Flights and SkyScanner is they aren’t pulling in live data. In other words, you may click through and find a price has changed.

When you’re searching a large number of dates and cities, you likely are not getting live data. These are tools to get ideas of where to go or arrange your trip.

Just click through, or use Kayak to search for a +/- 3 days, and you’ll get accurate prices (if it searches the same airline).

Searching All The Variations At Once

The main thing I like about Google Flights is that it doesn’t just show airport variation on the search results, it allows you to search multiple airports to anywhere.

SkyScanner will allow you to search all flights from the “United States” to “France”, but it won’t allow me to pick the major cities in Texas, for example.

Below, you can see I added Austin, Dallas, Houston, and San Antonio. 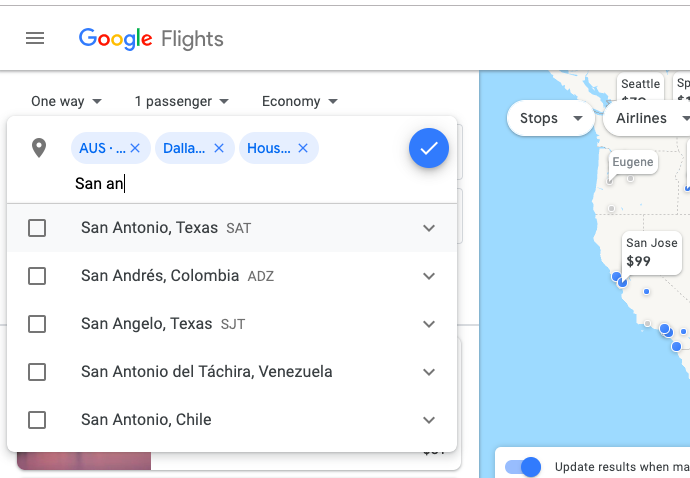 When I lived in Charlottesville, Virginia, I found I was willing to go to Richmond, DC, Baltimore, or Raleigh. This is perfect for that.

And I was also able to search those 4 cities to “France” (just like SkyScanner), either for a specific date or all of a month like September.

I hate to add another tool when Kayak is supposed to do this for you, but people love momondo.com, so I thought it may be worth mentioning.

When I checked Momondo, it found the exact same Austin to Lyon flight on Sept 5th for $299 (when so far the cheapest above was $309).

It just found a cheaper website by booking on EasyJet (which was the connecting flight). Although, sometimes you have to be careful on the European discount airlines because they show up first/cheapest in the search results, but when you actually go to book they just itemize mandatory fees, adding them later.

Sometimes it finds flights on websites I’ve never heard of and I try to find a rating, or if the price is near the same I try to book on Expedia (as they have free cancelation within 24 hours).

People always mention Skiplagged, because it is indeed a great concept. But in execution… well, it’s never shown me a cheaper flight and it always shows a more expensive flight.

This is exactly what SkipLagged was designed to do, and when I searched it, it never showed any of the cheapest options to Cancun or other places.

I think the website is a great concept, but it hasn’t worked for me at all, and I got the same benefit by searching the country of Mexico on SkyScanner.

1) I use sites that search other sites and are not booking sites themselves. They are not incentivized to show you flights that don’t pay them or show you different fares.

2) I also like to make sure I’m checking all the right airports and dates.

The Big Take Away

Search for “ideas” on SkyScanner or Google Flights.

Then search for your actual flights on Kayak (or momondo.com).

And that is how I search for flights.

How to find and book an award flight using British Airways Avios.