A Trick To Save On Delta Miles Flights

If you weren’t excited about the results of the Delta Miles Calculator from your city, I may have a trick for you…

For many cities, there are Delta flights for only 6,000 Delta SkyMiles to the Caribbean!

But for some cities, there were only a few cheap domestic flights.

However, I may have found an unusual use for the Delta Miles Calculator today…

How To Find Cheaper Flights With The Delta Calculator

Let me run through a quick example…

First, I noticed that according to the Delta Miles Calculator, the cheapest flight from my hometown of Charlottesville, VA (CHO) to Atlanta (ATL) was for 20,500 miles… which is a lot!

When I did a quick CHO to ATL search, it confirmed with the following prices:

So I went to the Delta Miles Calculator and typed in CHO: 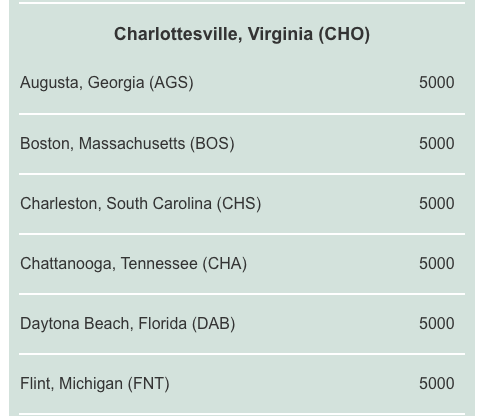 I figured Chattanooga (CHA) would likely go through Atlanta and so I did the same search from CHO to CHA and found many 5,000 mile flights!

And despite the fact that the cheap CHO to ATL flight was over 20,000 miles for the entire month I looked at, I quickly found the same flight for 5,000 miles as part of the first leg to CHA: 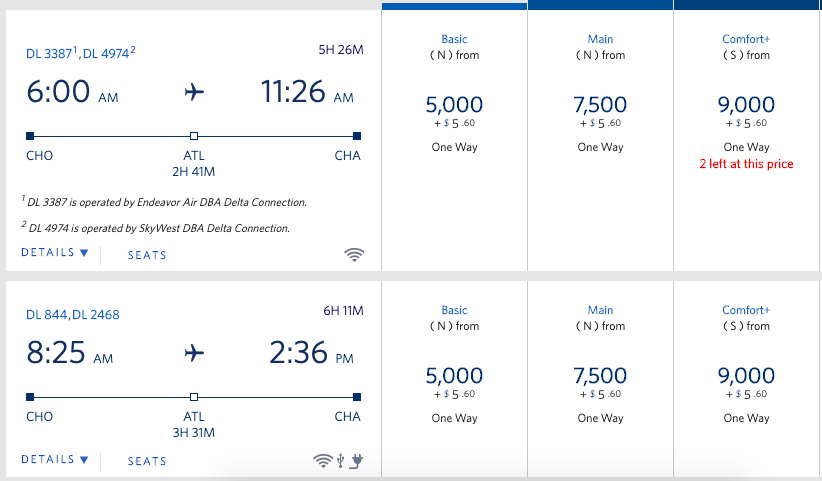 In other words, direct flights from Charlottesville to Atlanta are always over 20,000 miles, and yet flights via Atlanta to Chattanooga are consistently 5,000 miles.

How To Find Cheaper Flights Yourself

Wiki lists the following as hubs and focus cities of Delta:

Since I’ve been paying attention, I’ve only seen routes through these cities.

If your city has expensive flights to one of these cities and you’re trying to get a discount to one of them, you have a very good chance of finding a city pair that goes through that hub.

However, this doesn’t just work with any city pair you’d like.

Prices Are Based On City Pairs

The point of the Delta Miles Calculator is to find the cheapest cities because every city pair seems to be priced differently.

However, the crazy thing is that it’s priced on the starting and ending point, and stays the same regardless of your route (depending on availability).

Look at all the routes that show up when I search Austin (AUS) to Boston (BOS), which I searched because the calculator shows it has the cheap price of only 6,500 miles.

Yet the price is the same for all the routes.

Regardless of the route, as long as the beginning and ending city are the cities needed for a city pair, it often prices out the same.

Regardless of the fact that Austin (AUS) to Boston (BOS) flights fly through Cincinnati, Raleigh-Durham, New York, Minneapolis and Atlanta, all flights (with saver availability) AUS to BOS were 6,500 miles.

Yet, tickets direct to Cincinnati (CVG) were 10,000 miles at its lowest prices…

In other words, I could save miles by booking a flight to Boston via Cincinnati instead of a direct flight to Cincinnati. And the crazy thing is that all the flights to Boston price out at the cheaper 6,500 miles, regardless of what city they go through, and what the prices normally are.

Another interesting thing is that I not only always found cheaper routes to BOS via CVG, but found that there were no “basic” economy tickets available direct to CVG:

Again, basic was available at a lower price, but also the “Main” and “Comfort+” tickets were cheaper as well, and oddly enough First was more expensive… which I think is odd.

First, if you read our post The Only Delta SkyMiles Award Chart, you may remember that I mentioned that sometimes Delta flights from the US varied a lot, but all SkyTeam flights were remarkably consistent…

When sifting through the Delta first class award data I noticed that it never found a flight to/from Sydney for less than 225,000 miles in First.

Then I looked at the data for flights departing Sydney and noticed there were flights to Mexico City for 95,000 Delta Miles.

Here’s the crazy part, the flights below route through LAX: 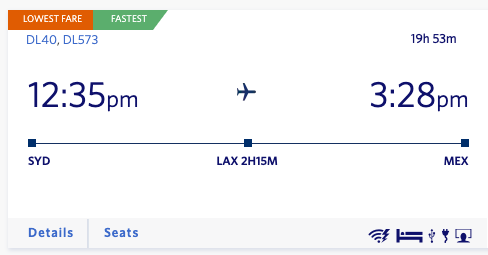 I mean, that’s still expensive to me, but the principle is this:

US based International flights, similar to domestic flights, sometimes seem to have dynamic pricing elements, varying city by city, even having higher prices. However, if you fly to & from other regions, it seems more fixed and often cheaper.

If you live in a hub, you could save by anchoring to a price on the Delta SkyMiles Award Chart to a nearby region.

Some people are paranoid about throwaway flights not being liked by airlines. With the exception of Lufthansa making the news in Europe, I don’t hear of anyone having problems with it, and I do it often without issues.

However, the biggest reason I don’t have any issue doing it is because I never have airline status, and in most airline accounts I don’t have miles sitting around.

If I were to get Delta miles today, they would have to be transferred in from elsewhere (like Amex MR), and I would transfer the exact amount for my booking. No more, no less.

While I’ve never had any bad experience, there’s nothing bad that could really happen. If they shut down my account, I’d lose nothing and create a new one.